I have a startup superpower – a superhuman ability to find the reasons any startup idea will fail.

It’s an ability I’ve honed through trial and error. Through dozens of failed projects. (My secondary superpower is the ability to come up with the absolute worst startup ideas on the planet.)

Building complex software for large organisations? FAIL. Corporate sales can be extremely difficult because there’s usually multiple-decision makers and they each have different agendas even though none of them will actually be using your product. The sales cycles can take months or even years so it’s extremely difficult to iterate and learn.

Or maybe you want to build Facebook, but for…FAIL.

Perhaps a more apt description is that I have a curse instead of a superpower.

I’ve met many others that have this curse as well, but with enough practice, it can be overcome.

Your thoughts and the things you say to yourself create your own reality. That reality impacts your perception of the world around you.

At the worst times, my inner dialogue sounded like this:

“The client hasn’t emailed me for three days. I wonder if he’s unhappy with the service? I’m not really sure what he could be unhappy about though. Is it possible that I offended him with my effort to make a joke in that project-wide email thread? Good job Rob – you know you can’t portray tone in an email. He’s probably not talking to me because they’re searching for another firm before they fire us.”

This style of “creative negative reality framing” use to perpetuate many areas of my life. When I met people I’d replay the interactions the next day to see if there was anything I said that could be taken the wrong way.

What I slowly trained myself to do was instead think:

“The client hasn’t emailed me for three days. Since it’s impossible for me to know exactly what he’s thinking, I’m going to see if I can come up with a few positive scenarios that would explain this situation. Perhaps he’s so happy with the work that he doesn’t have any changes to make at all. Maybe there’s something going on in his personal life that’s distracting him. Maybe he slept with his secretary and he’s hoping his wife doesn’t find out.”

It may seem like a subtle difference, but the way you talk to yourself is hugely important.

I was initially introduced to this technique when I saw this TED talk.

After a few weeks of proactively framing reality in a positive way, I became more optimistic about outcomes. I recognised more opportunities. I was more secure. I accepted that I wasn’t perfect and took it a bit easier on myself.

But it’s hard to turn this into an automatic reflex. It really does take work. 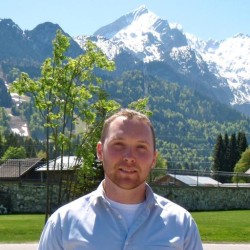 Social media is only as effective as the content you have to share. Online meetings and web conferences are excellent...